As Marge loves horses, and raised and showed Appendix-Quarter Horses (Hunter- Jumpers) at one time, she had to put in the two magnificent horses that somehow made it through the Civil War. 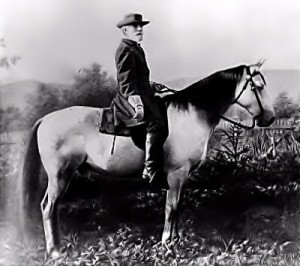 General Robert E. Lee and his horse, Traveler. Traveler was a gray American Saddlebred of 16 hands, notable for speed,strength and courage in combat. Greatly admired for his high springy walk, he needed neither whip or spur but always had such vim and eagerness. He could also be a difficult horse but he and General Lee had a special bond.

General Ulysses S. Grant and his warhorse, Cincinnati. Neither Grant nor Cincinnati ever flinched in battle even though bullets whizzed all around them. All remarked they had never seen two so composed and brave!! Cincinnati lived out his life retired to pasture. 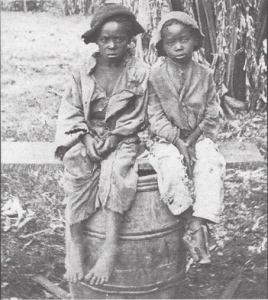 Slave Children. A haunting, undated 150 year old photo found in a Charlotte, North Carolina attic during a moving sale. It may have been taken in the early 1860’s and is surely a testament to the dark side of American History. A document accompanying the photo detailed the sale of John for $1,500, not a small sum in 1854. He is barefoot, clothed in rags perched on a barrel next to an unidentified young boy. A New York collector paid $30,00 for the photo album including John. The deceased owner of the home where the photo was found was thought to be a descendant of John. 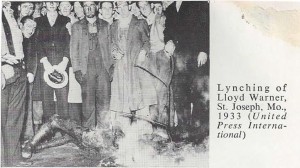 Lynching of Lloyd Warner, St. Joseph, Mo. 1933 WOUNDS PERSIST 75 YEARS AFTER LYNCHING (St. Joseph News Press, Joe Blumberg) Seventy-five years ago, a reported 5,000 people watched as a mob stormed the Buchanan County Jail to beat, kill, lynch and burn Lloyd Warner, a black 19 year old of St. Joseph who had been accused of assaulting and raping a white woman. Sheriff Otto Theisen held off the mob for three and a half hours, hiding Mr. Warner in a crawl space and denying he was in the jail. But fearing the mob would eventually break in and kill the other 11 black men in the jail, Mr. Theisen gave Mr. Warner to the crowd. Theresa Rowlett, 73 is Mr. Warner’s niece. She learned of the incident as an adult, through bits and pieces. “I just hate that it happened. He really didn’t do anything – that’s what my Mom told me. Regardless, “How could they do something like that to somebody?” Time has not healed all these wounds. Ms. Moore said several people, particularly back people avoid discussing the matter. Ms. Moore, a white woman has researched the lynching for a year. “Where were the clergy? Where were the judges? Where were the community leaders?” and then Ms. Moore asks. –Where are the answers?? 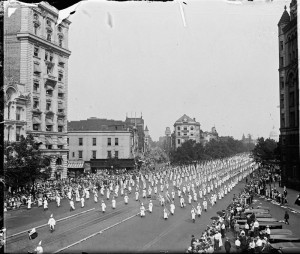 March of 1925, over 60,000 Klu Klux Klan members march in Washington, D.C. to the White House and U.S. Capital to display their ever increasing numbers across America 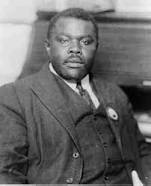 Marcus Mosiah Garvey, l887-1940 was a Jamaican Political Leader with a dynamic personality and an uplifting message of economic power for Blacks. He founded The Universal Negro Improvement Association and was known for his many quotes and business interests. Among his well-known sayings are “A people without the knowledge of their past history, origin and culture is like a tree without roots” and “I have no desire to take all Black people back to Africa; there are blacks who are no good here and will likewise be no good there” 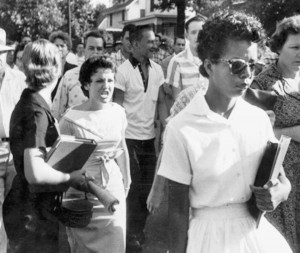 Segregationist protestors surround Elizabeth Eckford as she attempts to integrate Central High School in Little Rock, Arkansas, 1957. Reflecting on the experience decades later, Ms. Eckford observed, “True reconciliation can occur only when we honestly acknowledge our painful, but shared past. 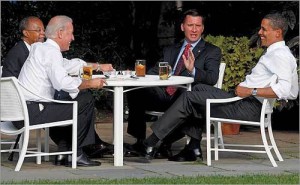 The 2009 White House ‘beer summit’ Vice President Joe Biden, Harvard professor Henry Louis Gates, Jr., Cambridge police Sergeant James Crowley, and President Obama met for a conversation over beers at the White House. In 2009 President Obama urged the races to talk to each other. Where are we in 2015 with that endeavor?

Following the Civil War of the United States, the nation lay in ruin. Plantations were restored the Southern Whites, but they had no labor force as slaves had been freed. Sharecropping seemed the perfect answer, providing employment and subsistence for Black Americans and whites had the land. Sharecropping was one of the few options for penniless freedmen to conduct subsistence farming and support themselves and their families. (Remember Tenessee Ernie Ford’s 16 Tons song!!)

However, after several years, due to a change in Federal funding, sharecroppers were evicted and camps of impoverished, destitute cotton sharecroppers and their families (mostly black) evicted from their shacks on Missouri Cotton plantations by wealthy planters in the 7 counties of the Boot Heel of Missouri began to be seen huddled together with their few pitiful belongings in the cold and freezing rain at the intersection of Hwys 60 and 61 (now replaced by Hwy 52. ) in south east Missouri. They slept in make-shift huts and jalopies and huddled near fire barrels.

Over l000 strong and organized by Rev. Owen Whitfield, a black minister they soon began to attract the attention (and embarrassment) of the Governor. Their plight had been brought about by a change in Federal regulations with President Roosevelt’s New Deal policies that allowed plantation owners to keep all of the Federal cotton subsidy if they evicted the sharecroppers and hired day labor, which was at the very bottom of the salary scale and a greatly demeaned position. If the planters retained the sharecroppers, part of the subsidy would be paid directly to the sharecroppers which the planters vehemently opposed. Sharecroppers also in general did not know how to read, so the complex contracts were indecipherable to them.

Sharecroppers formed Unions in the 1930’s. Membership in the Southern Tenant Farmers Union (with Rev. Owen Whitfield as an organizer) grew and leadership strengthened and protest became more vigorous. Landlords responded with a wave of terror.

The whole community of the BootHeel was greatly disturbed and fearful of this development. It was a first for a large number of blacks to be together and organized. Motorists noticed the pitiful large gathering and newspapers quickly picked up the story and front page articles and photographs of the 1500 men, women and children living on the roadside began to appear. Dr. Lorenzo Green of Lincoln Un. in Jefferson City was horrified and his students cancelled their spring prom and gave the money to help the protestors. Eleanor Roosevelt brought out their plight in her weekly newspaper column. Fifty landowners however,  met in Charleston, Mo on Jan 13 and adopted a resolution urging the government “to refrain from encouraging this movement” caused by “scheming agitators”. A New Madrid sheriff’s deputy told four St. Louis union activists, “We don’t have any use for people like you”

Actual help though was long in coming. The Highway Patrol forced all to move so they wouldn’t be so visible. The Red Cross said it was a man-made problem and so not eligible for their help. With great difficulty tents were finally secured from the Army. And of course, the “scheming outside agitators” slogan was used as well as Communist influence (who actually did help).

Eventually out of the sharecroppers dire circumstances being known, the government erected several housing communities in the area known as Cropperville and the Delmo homes forced to be segregated due to community outrage.

The Sharecroppers Protest movement of 1939 is significant as it was thought to be the first mass, non-violent, organized movement to gain basic civil rights prior to the actual  Civil Rights Movement some 20 years later. Much was learned from this protest movement that helped form later non-violent endeavors to gain the civil rights for all  African Americans.

However, it is also believed that the upheaval, worry and fear this protest created is possibly responsible for difficult race relations in that area to this day. The 1942 lynching of Cleo Wright a black could well be another ramification of the protest movement. 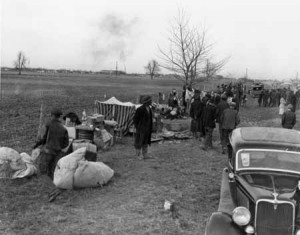 Sharecroppers on the Roadside 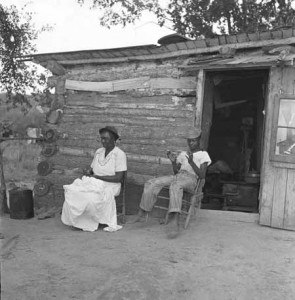 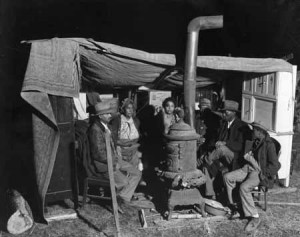 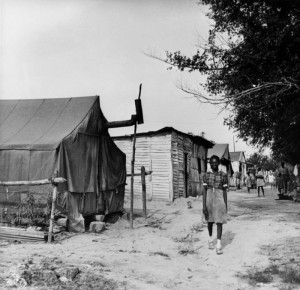 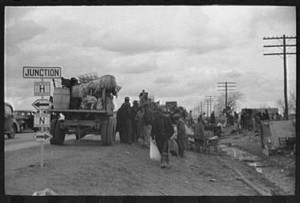 Sharecroppers along highway with truck 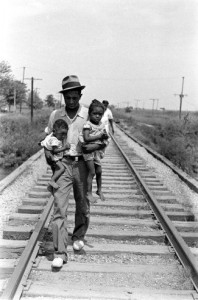 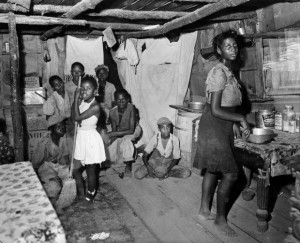 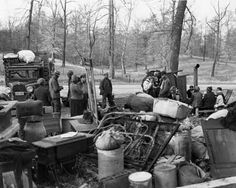 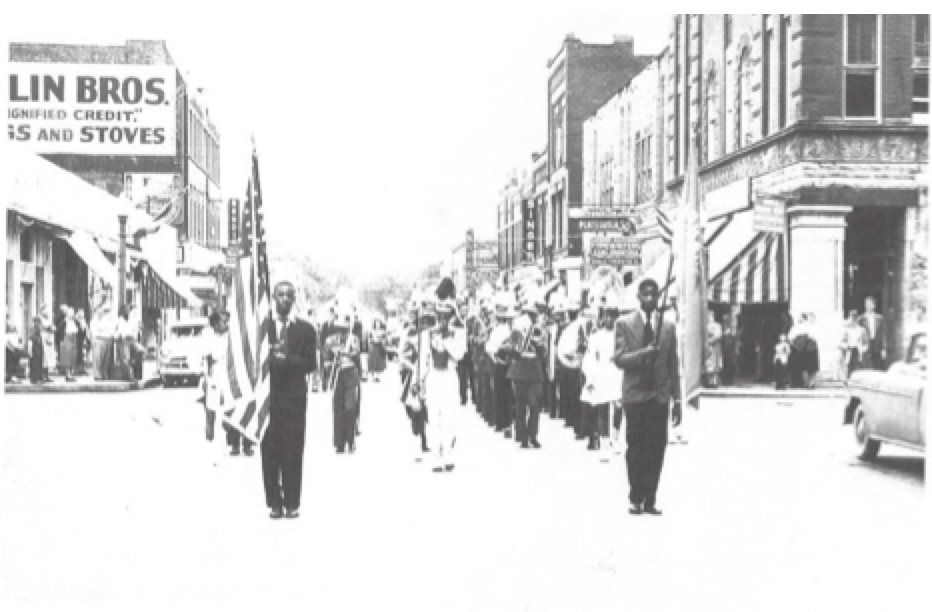 This is the highly acclaimed marching black band of Lincoln-Hubbard High School on the Northside of Sedalia before the days of integration. (probably in the 1950’s) They are on Ohio Street, heading north in downtown Sedalia. On the right in the picture is the Safeway Grocery Store on the corner. Further down is the Singer Sewing Machine Store.. On the left, barely visible is McLaughlin Bros. Furniture Store and Funeral Chapel. None of those businesses are presently in operation. 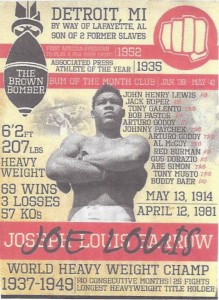 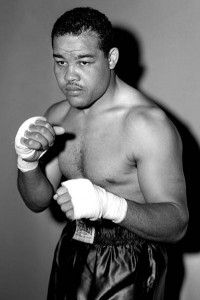 Joe Louis. Detroit, Mi by way of Lafayette, Alabama. Born May 13, 1914. Died April 12, 1981  A Son of former slaves. His family left the South out of fear of the Klu Klu Klux Klan. He was the seventh out of eight children. His father was an Alabama sharecropper and died when Joe was four. His mother took in washing to support the family. She remarried and the combined family moved to Detroit.

She wanted Joe to learn a musical instrument but he would hide his boxing gloves in his violin case and visit a gym to learn how to box.

Before he became champion, he was beaten once by Max schmeling of Germany in 1936. In 1938 he met Schmeling again and knocked him out in the first two minutes of the the first round. He and Schmeling became friends in their later years. Joe won 19 title fights and served his country honorably, 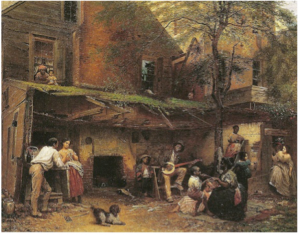 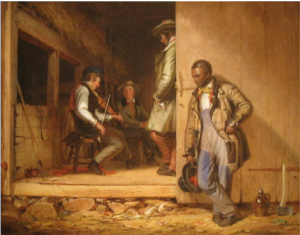 The Power of Music” 1847 by William Sidney 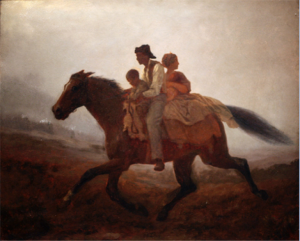 A Ride for Liberty

Eastman Johnson, 1824-1906 was a renown artist well known for paintings of famous people. He refused to marginalize African-Americans as in the painting,”The Power of Music” 1847 by William Sidney where the African-American is to the side and on the edge of the composition.

Instead in Eastman Johnson’s painting. “A Ride for Liberty” for example he focus the composition on the African Americans and their dramatic escape to the free North. In so doing, he paints a scene he often saw as a soldier in the Civil War. In the left foreground, he created the Union army then under the command of General McClellan. As McClellan marched southward, slaves often fled to cross his Union lines and secure their freedom. Here the father looks ahead to the promise of the future, the wife looks back to the hardships of the past, while the child stares downward at the excitement of the present.The sympathetic depiction and the year in which it was painted – 1862- strongly speaks to this image being one that visually addresses the Union cause in the American Civil War, and more specifically to the abolition of slavery. The event he depicted happened on March 2, l962 as a fleeing slave family crossed the battlefield to freedom. Mr. Johnson was a soldier in the Union Army at that time and often saw slave families take this risk to freedom.

Old Kentucky Home was Eastman Johnson’s first painting to focus on the status of race in the United States right about the time of the American Civil War. Tho depicting slavery, “Old Kentucky Home” made the South happy as it portrayed slaves having leisure and looking happy. The lady in white on the right is a mystery.