Marge is a product of Kansas – and considers herself of “sturdy homesteading stock”. She remembers the Depression and that her Father fried potatoes and eggs their usual supper, calling it (as their last name was Hampson) the Hampson Special.

As the family moved to Missouri, Marge was Valedictorian of Smith-Cotton High School, Class of 1949  and attended Central Missouri Teachers College (now CMSU) on a $60.00 scholarship. She was engaged and had a contract to teach an eight grade rural school in her senior year of high school.

Marge has never liked injustice. That has always enraged her. In high school biology class, she vividly recalls seeing one boy bullying another and appealed to the teacher who swiftly took care of the problem.

As the years went on, she and her husband (who was a product of Sedalia), both obtained doctorates; his in chemistry and hers in psychology. They have four children all grown, educated and on their own.

Returning to Sedalia in 1982, to build a log home and be available for grandchildren and care for aging parents, as a beginning psychologist Marge quickly became aware of domestic violence and with a local pastor started CASA (Citizens Against Spouse Abuse) even though local conservative pastors believed she was breaking up homes!! “ I don’t think I call violence, homes!” she said.

Another issue Marge was passionate about was the difficulty in prosecution of child abuse cases caused through the process of multiple interviews. She and the League of Women Voters established Child Safe which presently serves 11 counties and has funding from the Missouri legislature.

As she and her husband became aware of extensive, unnecessary incarnation and the “Prison Industrial Complex”, they obtained training at the Stone Church in K.C. and became Victim Offender Mediators, a Restorative Justice approach for first time offenders of non-violent crimes. 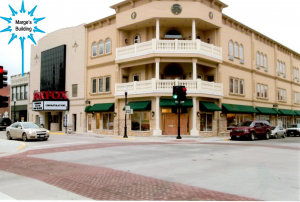 Furnell Building after renovation. Marge’s office has the star above it.

But it was while a very large building was going up near her psychology office in 2005 that she realized a new problem which was a complete lack of black construction workers or blacks anywhere downtown for that matter. In addition, Ohio Street in Sedalia, the main downtown business street was undergoing the “Streetscape” project, with State/multiple funding and there were not any black workers there either. As she explored those situations, she began to realize that Sedalia, (believe it or not in the l980’s!!) was still segregated. It was separate – but unequal.

Marge then became acquainted with Rose Nolen and the possibility of developing a Black History Library and engaging the North Side (the Black side) began to emerge. As the saying goes, the rest is history!

Marge says though that this is her last endeavor though her children seem skeptical!

Hopefully the Library will help bridge the Black and White divide and we’ll all realize we are just human – doing the best we can!