Rose’s little house was “cobbled together” in which she had lived for 30 years on Lima Alley on the North Side (Black) of Sedalia was sitting in a virtual jungle on a lot, 50 by 170 ft, the usual size on the North Side for “shotgun houses”. Trees were everywhere covered by fallen trees, logs and brush. Vines grew in a tangle over everything and occasionally one came across fallen fence wire/posts and discarded tires! 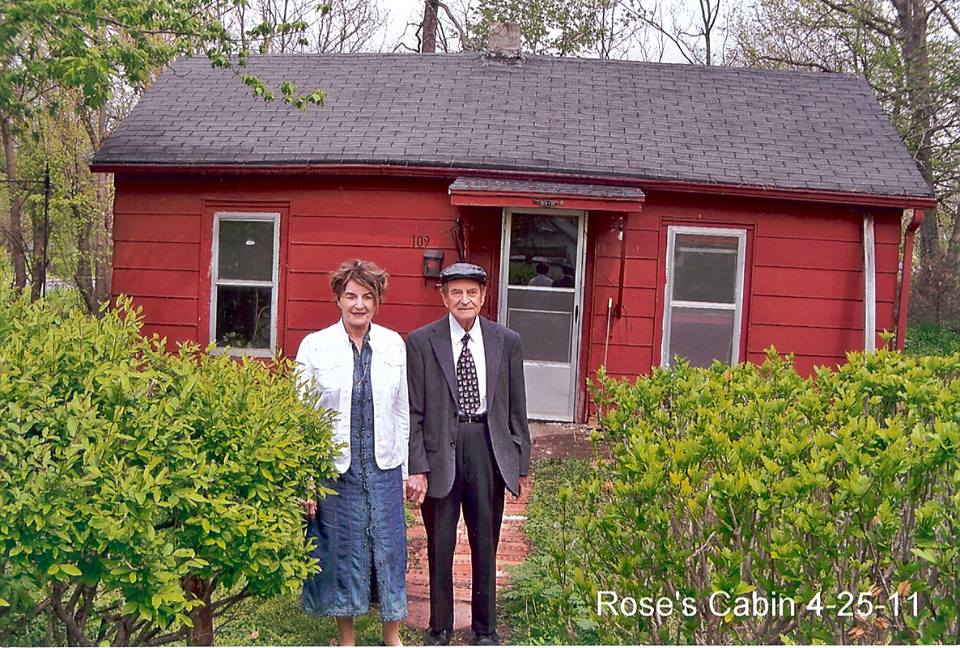 Through all of this, her beloved Rose of Sharon bushes thrived along the alley. Rose had let everything all grow up on purpose to feel hidden, secluded and safe as she raised her little son. Sitting in her living room with a rifle over her knees (she had been in the Black Panther movement) completed the picture! I think it relayed, “Don’t mess with me” and I don’t think anyone ever did!.

However, for those of us who wanted to change things and build a little library, it all posed a problem. The Youth Group of the Church of Latter Day Saints in Sedalia was the first to come to our rescue. Pick-up loads of brush, logs (we had a good chain-saw person) began to disappear. Individuals doing Community Service hours for misdemeanors were also helpful as in cleaning bricks we discovered buried, but eventually we had to “bite the bullet” and hire help. Marge and Jerry bought a used pick-up to help with this process, but there was a limit on what they could haul off to their farm!

As we cleared it all away and found the house, other problems surfaced. Though Rose had moved to a housing development, she really hadn’t. A desk, bookshelves, stove, refrigerator and multiple miscellaneous items remained. A brick stove, complete with chimney rose up in the living room. Quite impressive, but hardly helpful. After an unresponsive Rose, multiple phone calls to her son in Minnesota, produced results and that all left except the brick stove. After cleaning (concrete sure wants to stick on brick) they became our front walk.

As we finally found the house, it became obvious we couldn’t save it. The term “cobbled together” began to have real meaning! Also I was informed that it wasn’t a good sign when a post held up the roof and one side of the house! 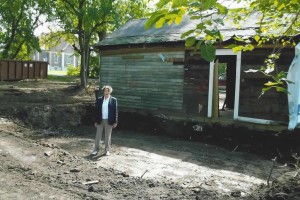 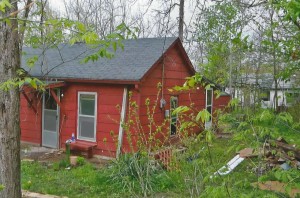 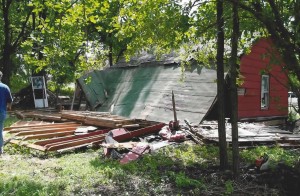 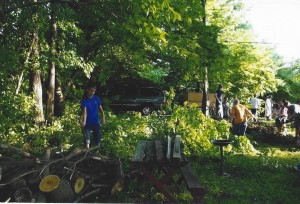 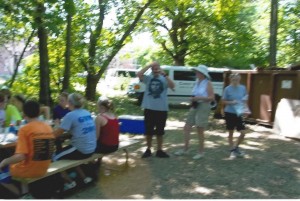 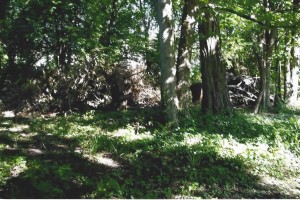 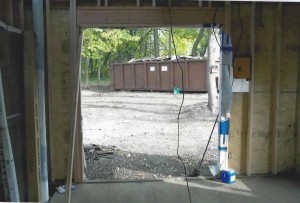 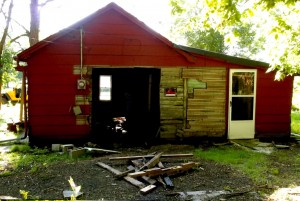 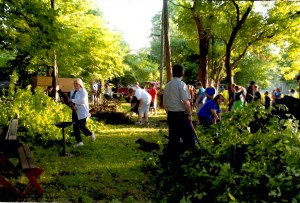 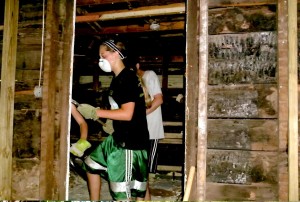 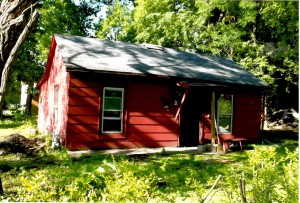 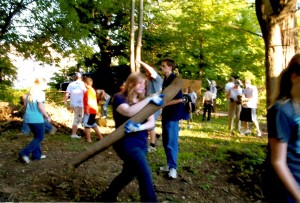 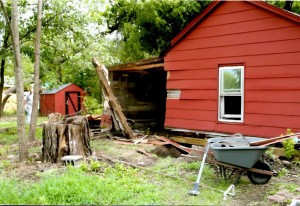 Getting the house down, however, was another dilemma.  Again good fortune came about in the form of a Methodist Youth group out of Independence, Mo. Though in their early teens, it was amazing what they could do. Complete with face masks to keep out whatever, they were quite matter of fact, saying they had taken down multiple dwellings. I was quite impressed and saw to it they had a continuous supply of cookies and Lemonade. They brought their own lunch. 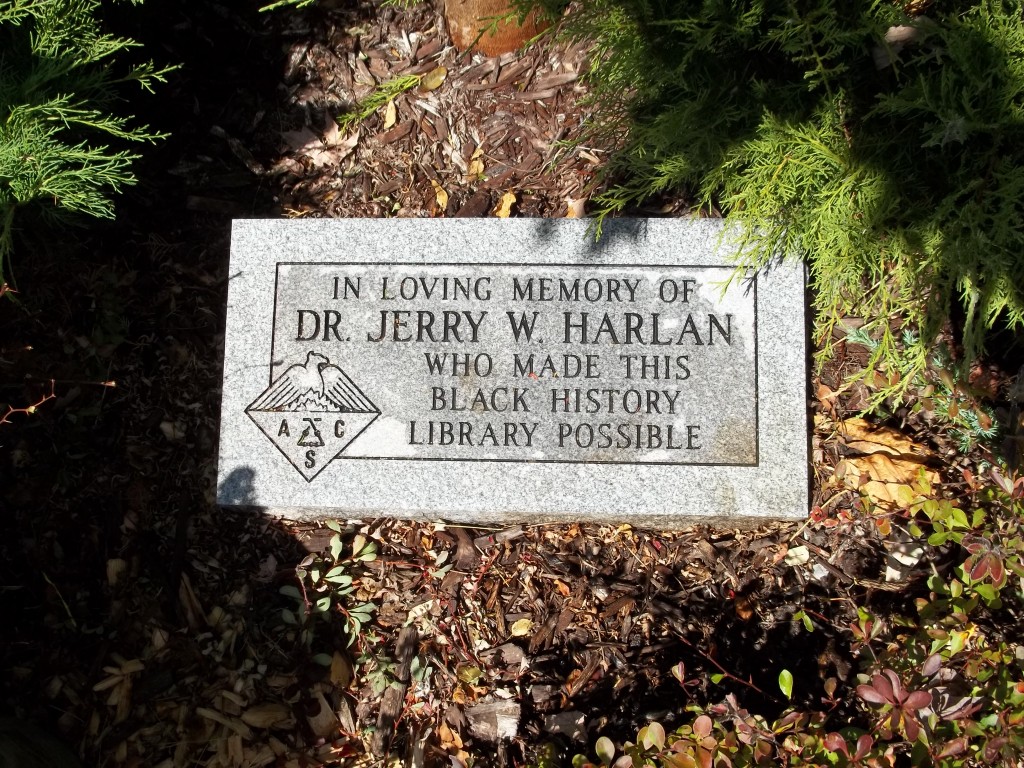 We now began to plan the Library, somewhat disappointed that we couldn’t incorporate Rose’s house in it. As friend husband, retired Chemist could handle all building aspects (we had designed and had built a 4200 sq ft. log home on our farm) it moved right along. Having to stay with our financial parameters/out of pocket expense, we decided on a large front room for displays and three small offices behind for myself, Rose and friend husband. The shed in the back, we worked over and it has been quite functional for storage and 3 chickens! (Nothing like fresh eggs). Due to conforming to disability regulations, the bathroom became almost as big as the little offices!

Well that is the story of building the Rose M. Nolen Black History Library. Sad to say, friend husband did not live to see it all come together though I try to comfort myself that he is really still with me. Sometimes that works – and sometimes it doesn’t!!