My Affair with Libraries

“Ours was a reading family.  Before marriage, my mother was a country school teacher.  My father was a teamster who drove a truck for the grain elevator.  Our books were supplied by our family who lived in Kansas City and whatever books our father could find in St. Louis.  Otherwise, we read the Kansas City Star.  I remember once we were out of books for a long time and one day when our mother came home it looked as though she had been crying.  She told us she had stopped by the library and asked for books.  She had been told by the librarian that colored people were not allowed to borrow books.  At the time I was struggling to write in cursive.  I made up my mind that day that one day I would write books.” 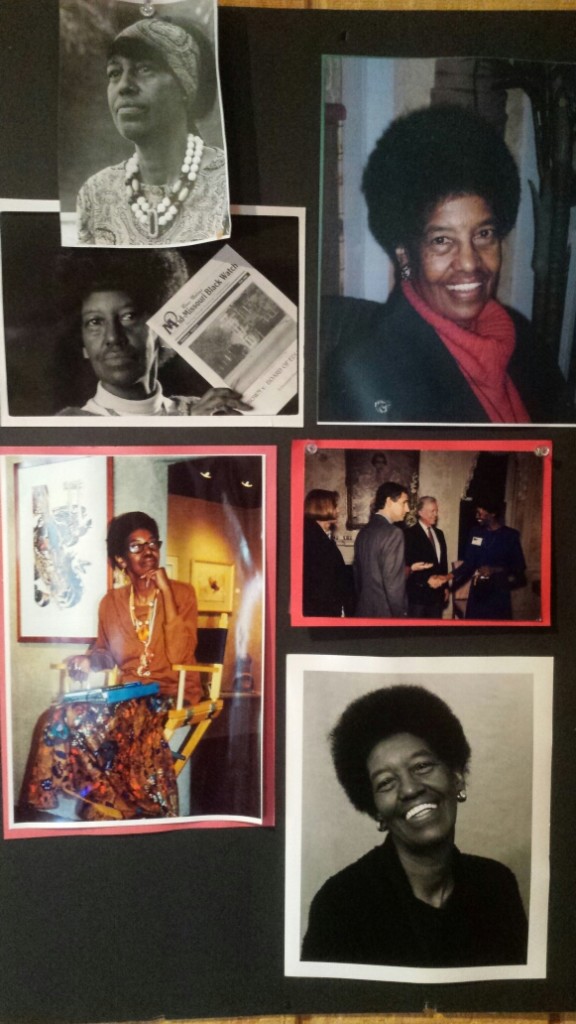 Rose unexpectedly passed away on January 1, 2015.

Rose was born in Windsor, Mo. She had four sisters and three brothers all of whom proceeded her in death. She has one son Mark and his wife Trina of Brooklyn Park, Minn.

Rose graduated from the C. C. Hubbard School in Sedalia in 1952. She was employed at Town and Country Shoe factory and the A.T.&T office in Sedalia. She started her Journalism career in 1983 as a columnist and staff writer for the Pettis County Local Times-News where one of her first interviews was with Dr. Margaret L. Harlan who had just opened her practice of psychology!

In 1985, she founded her publishing company, RoseMark Communications, and wrote five books and publications.

For ten years she was a columnist and writer for the Columbia Daily Tribune, Columbia, Mo. where in 1989 she was named as the State’s best columnist by the Missouri Press Association.

In 1992 she launched the “Mid-Missouri Black Watch” newspaper which she wrote/edited/and published quarterly on African American History and Culture presenting the many positive events in Black neighborhoods to offset the mostly negative news about African Americans that local newspapers printed. She also wrote and published “Time Out” for working single mothers as she was.

These publications earned her a guest spot on “The MacNeil/Lehrer News Hour in 1993. In 1966 she was presented with the Martin Luther King, Jr. Award for her commitment to leadership, service and multicultural amity and ethical standards. Then in 2001 she received the Governor’s Humanities Award for Excellence in Community Heritage. At one point in time, she also had an audience with President Jimmy Carter.

During her career she wrote for the Columbia Missourian and the St. Louis Post- Dispatch. She was also a regular contributor with her own column in the Sedalia Democrat until shortly before she passed away.

Her interests included local history, Missouri African American History and issues affecting working-class neighborhoods. She was very active in multiple organizations over the years, was a member of the Taylor Chapel Methodist Church and a vital force in establishing the Rose M. Nolen Black History Library. Writing and action was her passion. She will be greatly missed by many!!

Of special concern to her was that Black lives were often portrayed in newspapers as violent and criminal. She wanted the public to know that most Blacks lived upstanding, positive lives. She thus began her Black Watch, a twice monthly newspaper commemorating family gatherings, basket dinners, church activities and healthy fun for all. It contains a wealth of African American history in Sedalia and surrounding counties.

As Rose herself was a working, single mother she wrote Time Out to help other working mothers learn to care for themselves.

Rose also published an article, Joplin’s Dream Deferred which appeared in the January, 1986 issue of Opera Guide. She served for two years as President of the Scott Joplin Commemorative Committee, Inc. in Sedalia, Mo.

By this time, Rose had her own publishing company, Rosemark Publications so she could publish as she wished!

In 2003, she was the recipient of the Governor’s Humanities Award for excellence in community heritage.

Rose was President of the Scott Joplin Committee, Treasurer of the Sedalia Public Library Board and in April of 1985 was appointed by Mayor Larry Foster as Treasurer to fill the unexpired term of Oscar Reedy who had suffered a fatal heart attack. When contacted about her appointment, Ms. Nolen stated she was very pleased to be appointed by Mayor Foster to serve the City of Sedalia as their treasurer.”I’m very interested in Sedalia and want to do whatever I can”.